…the mobile ice rink for hire and for sale!

Nowadays, a mobile ice rink is part of the cityscape in many countries and an integral part of many Christmas markets. However, at the beginning of the 20th century, ice rinks could only be installed permanently due to the ammonia cooling which was commonly used at that time. In the process the harmful ammonia evaporates within a piping, which lies in a concrete slab.

In addition to the use of toxic ammonia and the lack of mobility, this method also has a serious disadvantage in economic terms: the entire concrete base must be frozen, so more energy is needed, which must be provided by a chiller with higher performance. Such chillers are significantly more expensive and accordingly, the operating costs are also higher. Furthermore, there is always an increased risk of operation in the case of ammonia systems. As a result, necessary safety measures generate further avoidable costs.

1981 – The birth of the first indirectly cooled EPDM ice rink! 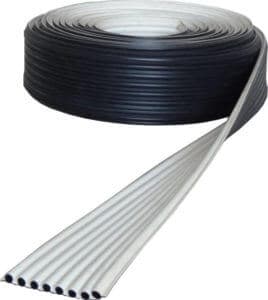 1981 we developed the first indirectly cooled ice rink with our patented “double absorber system” as part of an experimental project of the Research Promotion Fund of Vienna.

Shortly after, this system was used in Retz / Austria to heat the local swimming pool during summer and to generate an ice surface in winter.

The absorber mats used for this purpose consist of several interconnected fluid channels made of EPDM (Ethylene Propylene Diene Monomer), a synthetic rubber which we already use for pool and water heating since the 70‘s.

In Retz for the first time an environmentally friendly coolant (brine) was pumped through the cooling mats to freeze the water on top.

Of course, our concept had enormous benefits compared to the directly cooled system such as sustainability, but most importantly it could be operated without the harmful ammonia.

Ever since, thousands of mobile ice rinks, rental ice rinks and permanently installed ice rinks have been built with our technology and we take favourable note of the fact that competitiors have always tried to copy us as a recognition of our merits. 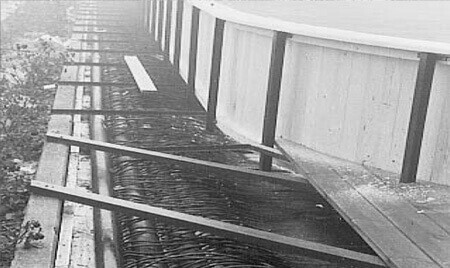 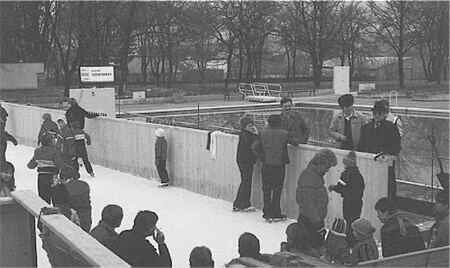 Our TÜV-certified ICERACK® ice rink consists of the following components:

✓ Quality „Made in Germany“

Transport, storage and installation of the mobile ice rink

In “transport mode” the ice mats are stored rolled inside the ICERACK®. Removable transport handles allow easy stacking for space-saving storage (up to 320m² ice mats can be stored on only 1,6m² footprint) and also provide a safe transport.

To change to “operation mode”, the ICERACK® modules are placed in a row next to each other. Afterwards, the modules are coupled by screwing the collector pipes together. Then the ice mats have to be rolled out to a continuous surface. Subsequently, the brine is cooled down by a cooling unit and pumped through the ice mats. Hereby the temperature of the ice mats drops below the freezing point and sprayed water freezes to an ice sheet.

The advantages of our mobile ice rink 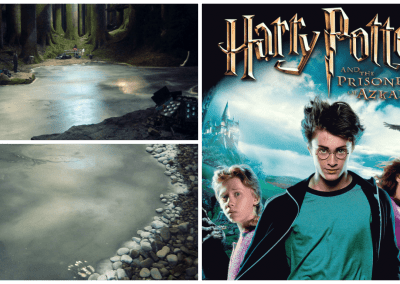 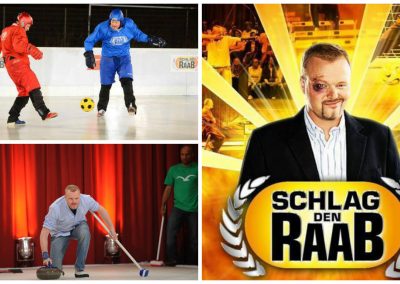 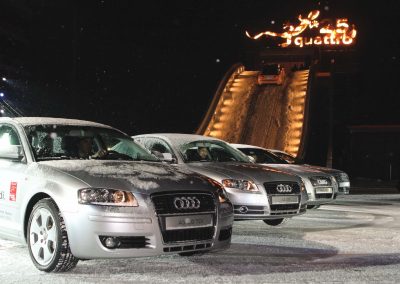 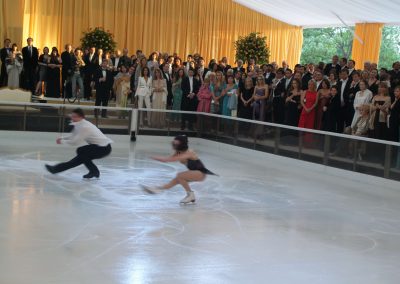 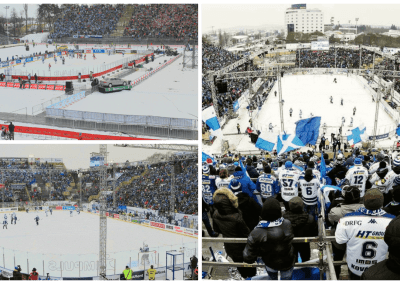 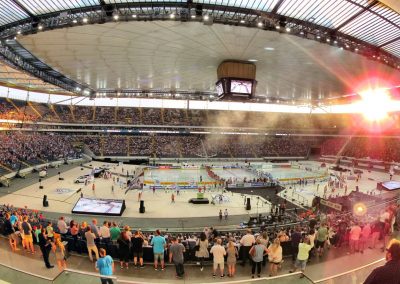 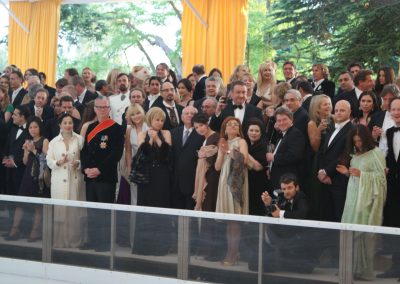 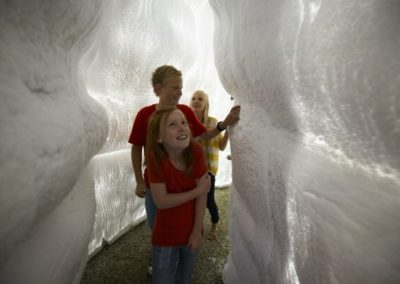 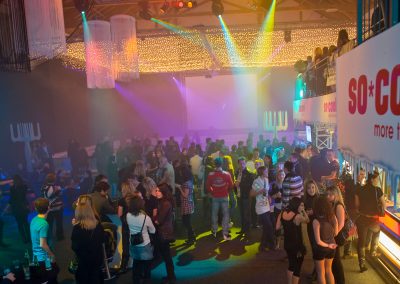 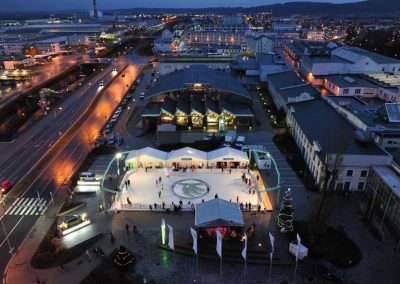 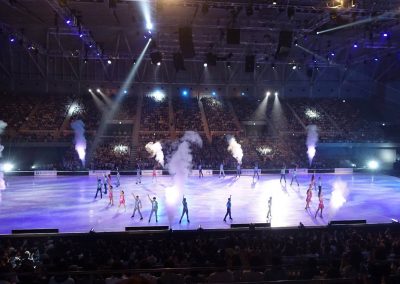 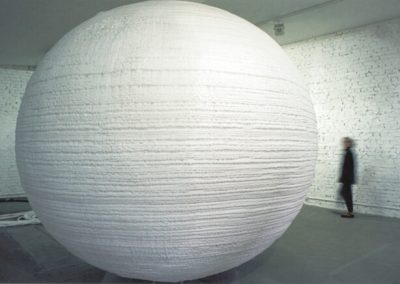 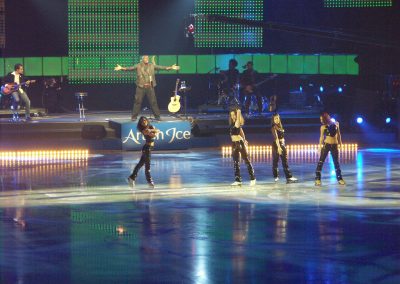 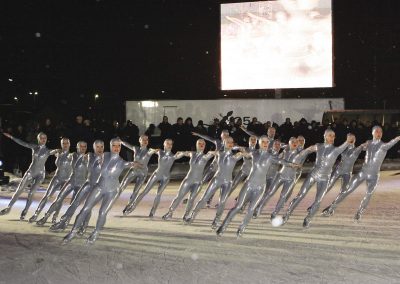 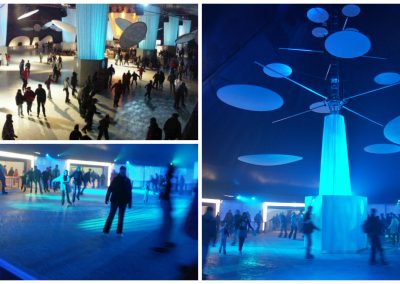 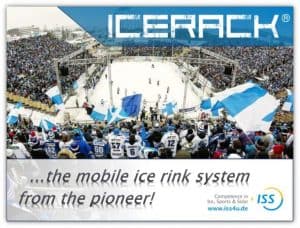 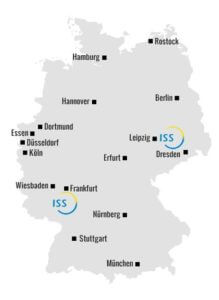